Everyone wants to stay young forever, and that’s exactly what AgeX Therapeutics (AGE), which has recently separated from the biomedical company BioTime (BTX), is aiming for. Each shareholder of BioTime received 10 shares of AGE, which accounted for 40.2% of the total shares so that on a fully diluted basis, AGE has 35.8 million shares outstanding. At a current price of $5.4, it trades at a market cap of $193.3 million. Is it too expensive for a pre-clinical stage biomedical company?

What problem does AGE try to solve?

As you know, starting at a certain age (around the age of 18), the regeneration of cells in the human body begins to slow down and, in addition, existing cells begin to age. The aging process is accompanied by quite a few painful diseases that humanity has yet to find a solution. AGE is trying to solve this problem by developing cell regenerationÂ technology.

This process sounds like science fiction, but in recent years there has been an impressive development in the field and several genes have been discovered that are likely to slow the aging process. The way to find the solution that will extend our lives to the age of 240 is still very far away, but I believe that humanity will indeed solve this issue in the far future.

Does the company have enough money to fund its R&D?

AGE currently has only revenues from its genomic database LifeMap. The rest of the company’s products are in a preclinical phase, meaning that it will take many more years for the development to complete and to receive (if they receive) the FDA approval. Until then, as usual with such companies, it would need tens of millions of dollars in R&D spending, something it would have to raise from investors. 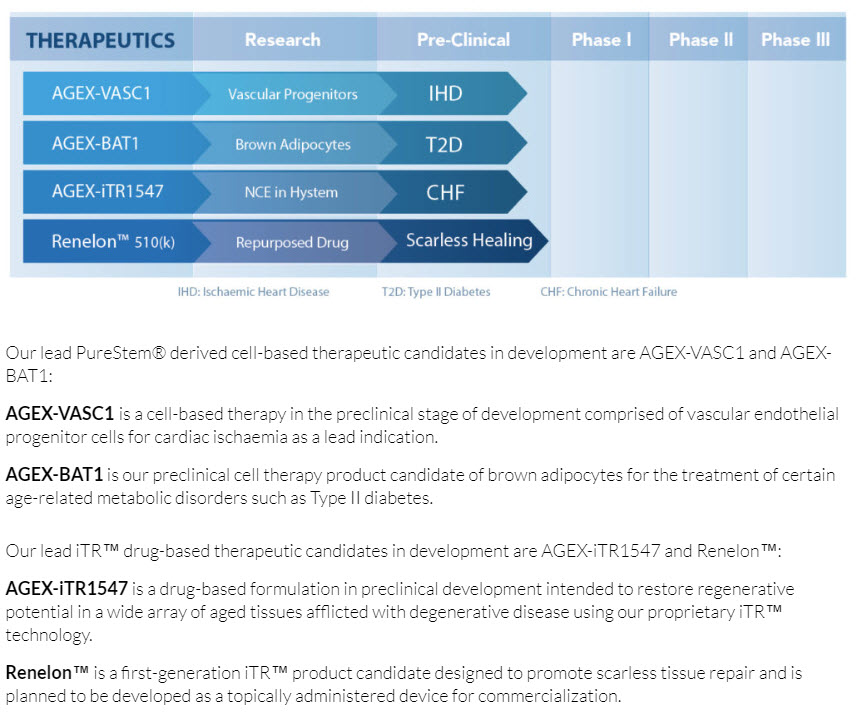 According to the pro forma report, in the first nine months of 2018, the company had revenues of $1 million and combined gross and operating expenses of $8.7 million, so that at an annual level the company is expected to have an operating loss of $10.5 million. At the end of the third quarter, it had $8.7 million in cash, which could finance the company operations for three more quarters. After that, the company will have to raise additional capital and this will dilute investors. Despite the hype of the field in which it operates, it is hard for me to believe that it will be able to raise the money at its current market cap (close to $200 million).

However, it should be remembered that in August, Juvenescence, which specializes in developing treatments that focus on improving and prolonging human life, acquired 59.8% of AGE for $43.2 million (50% paid in cash and 50% paid by convertible bonds for 2 years with an annual interest rate of 7%.) In a simple calculation, the shares were acquired at a value of $72.2 million, or $5.7 per share, a tiny premium to the current price.

I assume that Juvenescence believes in the direction that AGE is going to, so it was willing to invest in it at such high valuation, and therefore it may help raise funds for the company in the future. Still, when it trades at a price to sales multiplier of almost 200, and considering the huge amount of capital it will need to raise in the next few years, I believe that the stock will find it difficult to go up in the near future (Incidentally, on the first trading day, November 29, the share traded around $3, and only in the middle of the second day, November 30, it jumped above $5, where it is currently traded). You should also take into account the expected sales pressure of those who received spin-off stocks without asking for it, and this can also push the stock down in the coming months. In other words, I prefer to continue focusing on profitable companies with higher levels of certainty and ignore investment in AgeX Therapeutics at the current price.

Be the first to comment on "is BioTime spinoff – AgeX Therapeutics, too expensive?"