A comprehensive study conducted at Purdue University revealed that spinoff shares achieved an excess return of more than 10% per year above the US stock market return over 36 years – between 1965 and 2000. Researchers recently extended the study up to 2013, and the results were the same.

The result is not surprising. There are many reasons why spin-off shares beat the stock market over time. First, we must remember that a spin-off is actually a dividend distributed to shareholders of the parent company, so as higher the value of the spin-off gets, a larger portion of the parent company is separated out, thus decreasing its value more dramatically. And so, just opposite to an IPO, in this case, the parent company’s desire is to divide the spinoff shares when they are worth as less as possible so that these shares are start off being underpriced.

Why Spin-Off Shares Are Often Undervalued

Contrary to cash dividend, investors who received spinoff shares did not ask for them, which is why most of them will be in a rush to sell them at any price. Spinoff Shares are usually of smaller dimensions and are not included in the leading indices, so institutional investors who receive them – most of whom have restrictions on holding shares of companies that are not in the indices, also rush to sell. For the same reasons, analysts are in no hurry to issue recommendations on purchasing these shares. These things put pressure on the spinoff shares in the initial period, and reduce their prices further down, lower than their fair value price.

In many cases, executives of the spinoff company receive options with an exercise price which is based on the stock price in its first trading period. Therefore, they do not make any special efforts to market the company to investors at the outset, in order to keep the price low and give them attractive options as possible.

Shares can continue to be held under investors’ radar and stay generally quite cheap until the first financial report is published. The reason for that is because up until that time the company’s financial data is not updated in most financial sites databases, and therefore do not come up on stock screeners. The turnaround usually happens around that point, and the spinoff shares start to move upward. Why does that happen?

After the spinoff, the company is free to concentrate 100% of its resources on its activity without limitations imposed on it by the parent company. It can raise money, become more efficient, devote more resources for marketing and sales, expand its operations into new areas and acquire other companies. All these actions lead to growth, to an improvement of financial stability and increased profitability, just the things that increase the value of the shares. In most cases, as said, the spinoff executives receive a benefits package and financial incentives which are based on the company’s success, therefore they are also are strongly motivated to produce growth of the business. Over time, analysts begin to cover the new company, which makes it jump on investors’ radar.

Spin-off stocks beat the market in the long-term

A proof for the excess return of spin-off above market return can be easily seen by comparing spin-off ETFs (Currently, there is only one spin-off ETF – the Invesco S&P Spin-Off ETF (CSD), tracking the S&P U.S. Spin-Off Index) with the leading indices as is shown in the chart below. 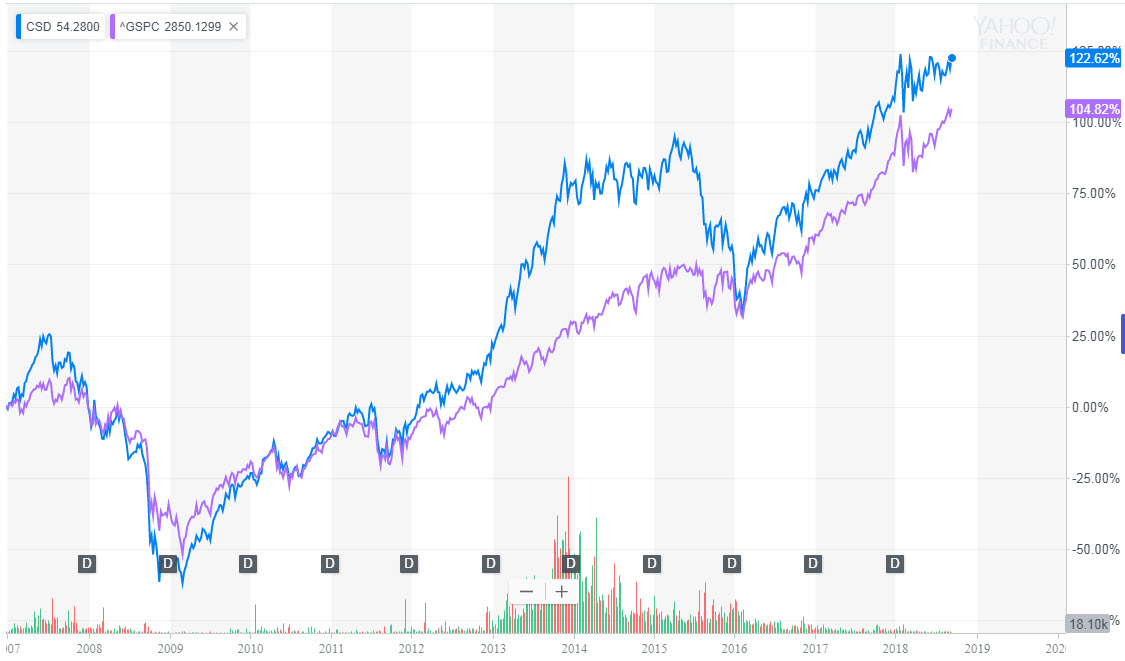 While buying all spinoffs will yield a higher return than the market, the excess return can be improved dramatically by choosing only the most attractive spinoffs. This is exactly what I’m doing in the LongRunPlan portfolio. I analyze all spinoff and selectively choose the ones which have strong fundamentals and are most undervalued. This strategy was very productive since I started in 2004, and my portfolio beat the market big time.