Bioverativ (BIVV),the Hematology Division of Biogen, has recently separated from the pharmaceutical giant, mainly to let it continue its strong growth on its own. BIVV concentrates on hemophilia, a market whose size is estimated at $10 billion a year worldwide. The company has two FDA approved drugs – ELOCTATE and ALPROLIX, which produce sales totaling at more than $800 million in the last 12 months. BIVV is already generating a positive net income, which I believe will be around $200 million in 2016. In addition, it has a perfect balance sheet with a $325 million in cash and no debt.

Since receiving the FDA approval for the two drugs, the Company increased its sales by over 50% per year, and is now already controlling about 25% of the US market. The company has another hemophilia drug up its sleeve, with a broader indication, which – if approved, will expand the overall market sales from 10 to 25 billion. In addition, BIVV has other drugs and treatments that are in the primary clinical stages.

This is clearly a quality company with a clean balance sheet and a significant growth potential, but the question is – is the stock cheap enough?

Currently, it is trading at a P/E of 29 (or EV/EBIT of 17) for the expected financial results of 2016. Not particularly cheap. The Company management is looking for a growth of 17% -19% in 2017, i.e. at the end of the year, sales could cross the threshold of a billion dollars. With an operating profit margin of about 38% and a full tax rate of 35% (the company actually had estimated tax rate of 37%), the company will earn $245 million of net income in 2017, that is, the future price-earnings multiple will remain high (23.3). Although multiples of competitors, such as Shire (SHPG) for example, which has annual sales of $2.8 billion in the field of hemophilia, are also quite high, but my conclusion is that the competitors stocks are too expensive, and not that BIVV is cheap.

My main concern is that management is too optimistic and the growth will significantly weaken in the coming years. In fact, management has stated that it foresees an increase of competition in the short and medium term, mainly because many drugs for hemophilia are expected to enter the market in the near future. The new drugs BIVV has up its sleeve will also not support sales, since most of them are only in the first phases of clinical trials. Therefore, it may be that the management’s forecasts are too optimistic indeed. In this case, there is no justification for such a high pricing. Immediately after the spin off the stock was traded at $44 and if it returns to that it will be much more interesting to enter. As of now, the price is too expensive in my opinion. 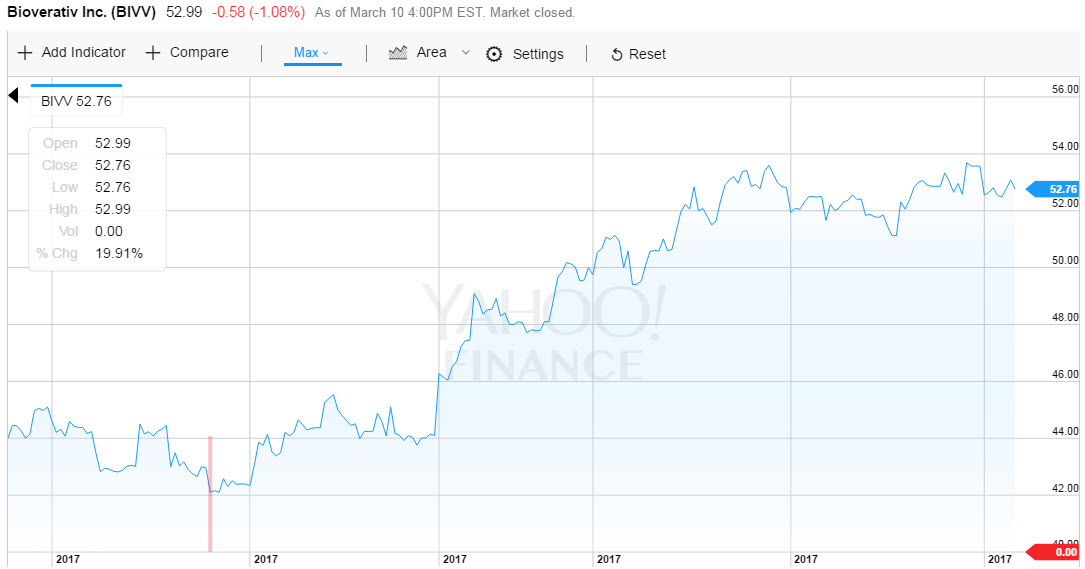