In mid-September SPX Corp. (SPXC) separated its divisions of engineering solutions in the areas of Food and Beverage, Power and Energy and Industry via spin-off, and packaged them under a new company named SPX Flow (FLOW). In the food sector FLOW provides its customers with machinery and equipment for drying, heating and more. In the energy sector it mainly provides equipment for production, suction and transport to oil and gas companies, and in the industrial sector it sells mechanical equipment to industrial companies in the fields of chemicals, infrastructure, mining and more. The Company’s activity covers 35 countries through which its sales are reach 150 countries worldwide. 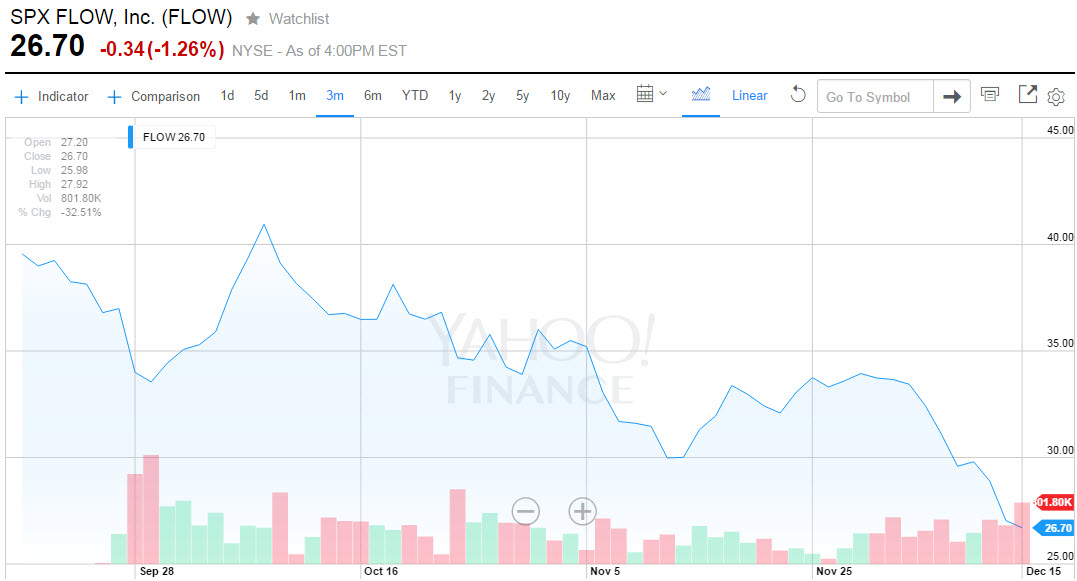 Flow was separated with a strong balance sheet of $1.2 billion of current assets ($207M are cash and short term investments) versus only $760 million of current liabilities. Note that long term liabilities include $1 billion of long term debt, but the company’s consistent cash flow should be able to support interest payments in the following years even if revenues decrease as we predict.

Indeed, the global economic slowdown has had an adverse effect on the total revenues of FLOW in recent quarters. In the third quarter the company revenues declined by 13.5% and its operating profit decreased to 9.5% (compared to 12.5% in the corresponding quarter a year ago). The Company’s revenues are now divided more or less equally between the three fields of activity, but naturally the sharpest decline was recorded in the energy sector following the decrease in demand for its products by companies in the oil and gas industry. For instance, during the last nine months revenues from the energy sector fell to $533 million, 24.3% less than the revenue of the corresponding nine months in 2014. In the food and beverage sector there was a more moderate decline of 8%, while the industrial sector decreased by 6.8% from the corresponding period.

The Company estimates halting the decline in revenues along with increasing efficiency, thus improving their profitability. Contrary, I estimate additional erosion in revenues in the near future as the demand for most of FLOW’s products and services strongly depends on the level of new capital investment and maintenance expenditures by its customers. Last year, businesses of many of its customers, particularly oil and gas companies in light of the negative inclination of the industry, but also chemical companies and general industrial companies, are facing slowdown in operations, thus decreasing their orders from FLOW. Recently, the company was facing a new challenge from the Food and Beverage sector in light of weak dairy prices and recent capacity overbuild. On top of that, FLOW also operates in a highly competitive market, where some competitors will possibly be capable of offering lower prices which FLOW will not be able to match.

In light of these risks and the pessimistic global economical view for the industry, I predict that revenues of the company’s three operating sectors will shrink by at least 5% in 2016. I’m more optimistic for the operational profitability, and expect it to stay close to current level (13.5% in F&B, 14.5% in energy and 14% in the industrial sector). Deducting General and Administrative expenses of around $48 million and adding back depreciation of approximately $59 million, yields an EBITDA of about $295 million in 2016. This means an EV/EBITDA multiplier of 7.5, lower than the average multiplier in the sector (around 8.5), but not low enough for me.

A more detailed FCF valuation analysis under the possible (but relatively optimistic) assumption that the decrease of revenue will stop in the next 12-24 months, and that profit margins of all sectors will improve gradually at a rate totaling about 2% in the next five years (as the company expect), the fair price of FLOW is between $28-30, just about 10% above the current price in which the stock is traded ($26.5).

Analysts are more optimistic and give the share a target price of between $32 and $45, with the average being $39. One must go with their optimistic spirit for the stock to have enough room to climb, but they are probably too optimistic and ignoring the major risks facing ahead. However, if the stock drops below $20-22, FLOW will be more interesting for further research.

The materials posted on this website are for general information purposes only, and should not be regarded as a recommendation and / or advice for purchasing of the securities mentioned, and anyone using them does so at his or her own responsibility. All investors are advised to conduct their own independent research into individual stocks before making a purchase decision. The author does not have an investment advisor license, and does not have a position in any of the securities mentioned on this page.